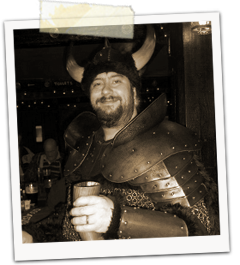 Academic Philosophy:
As acting Dean, Rob has a wide range of roles within the faculty - from putting together the website and random tech through to designing, scheduling and running events. Having been inducted into the fold by three Mad Irish Women who managed to turn the phrase "What to you know about writing websites?" into "So it'll be ready to launch in 3 weeks?" over the course of one pint, Rob threw himself into the challenge. Since then he's never looked back or found the ability to say "No" (apparently that's the Librarian's job) to doing a host of things from Rockbusters to Luggage Wars. Rob has been a faculty member for 2013 and 2015, but takes the occasional sabbatical to run guilds / sects / societies / band crew for the International Conventions.