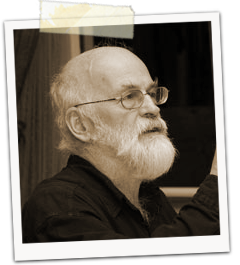 Sir Terry Pratchett - The man, the myth, the legend.

Author of the bestselling Discworld series, as well as numerous other books for both young adults and grown-ups. Award-winning documentary maker. Tireless campaigner for Alzheimer's awareness, assisted dying, and orangutans. Journalist, Knight and probably even Blackboard Monitor. But you knew all these things already - he's the very reason that there even is an Irish Discworld Convention. He sadly passed away in March 2015.

He attended the inaugural IDWCon in 2009, and conducted exclusive video interviews at both the 2011 and 2013 IDWCons, which were also shown at the 2015 IDWCon. 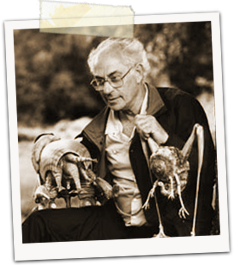 Jack Cohen - Co-author of the Science of Discworld books.

What can we say about Dr. Jack Cohen that doesn't make it seem like he has lived the lives of three (very accomplished) people? His C.V. runs to an impressive seventeen pages that include his experience and qualifications obtained over fifty years of educating some of Britain’s finest - including one (so far) Nobel Prize winner. He first collaborated with respected mathematician Ian Stewart in 1991 on a paper entitled “Chaos, Contingency and Convergence”, which led to many more papers and eventually, in 1999, to The Science of Discworld and its three sequels, as well as two other Sci-Fi novels (Wheelers and Heaven), and sundry other articles and books on a variety of subjects.

While Jack did originally intend to come along to IDWCon 2017, he is now unfortunately unable to attend for health reasons. We'll all miss him greatly, and we hope his health improves soon. 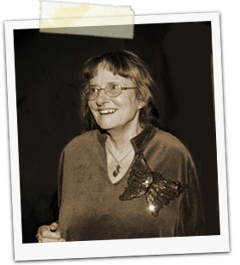 Jacqueline Simpson - Folklorist extraordinaire, and writer of the Folklore of Discworld.

Jacqueline Simpson is a researcher and author on folklore and legend. She studied English Literature and Medieval Icelandic at Bedford College, University of London. Since then, she has been an active member of the Folklore Society, having served at various times as Editor, Secretary, and President, and has written many books on various aspects of folklore. She has been a point of reference for Terry since he met her at a book signing in Worthing, her home town, in 1997 - which then led to their collaboration on The Folklore of Discworld in 2008; her talks and storytelling sessions have been a fixture of Discworld Conventions ever since. She has also been known to participate in the odd game of Werewolf. 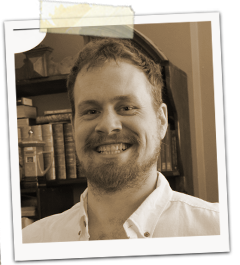 Ian Mitchell - Chief of Design and Production at the Discworld Emporium.

With a background in fine art, roguish Ian joined the Discworld Emporium in 2007 and has risen through the ranks to become the Emporium's chief of design and production. Along with creating official Discworld Merchandise, Ian has lent his skills to providing illustration and art direction for Discworld boardgames, apps, and publications including The World of Poo, Mrs Bradshaw’s Guide, The Compleat Ankh-Morpork, Discworld Diary 2015 and The Discworld Atlas. 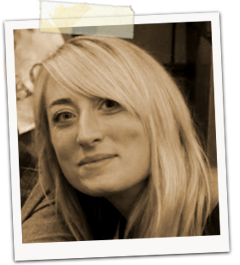 Reb Voyce - The one who actually gets things done at the Discworld Emporium.

Reb absconded from a career in broadcasting to join the Discworld Emporium team in 2008. From casting and painting the 'Unreal Estate' sculptures of Discworld's Guilds and landmarks, her aptitude for scheming and plotting soon had her out of the workshop and managing the Emporium shop, website and social media.

Reb also enjoyed a brief stint as Terry's hairdresser, accompanying him to appointments and tackling the fan-mail mountain, but such ventures were mostly an excuse to go to the pub.

Backspindle Games - David Brashaw and Leo Boyd, the folks behind the Discworld board games Guards! Guards! and Clacks.

Leo and David collaborated since the 90's to produce the Guards! Guards! boardgame, which after many years of revisions and updates was released in 2011. Since then, Backspindle Games has gone from strength to strength, including winning the UK Games EXPO ‘Best New Family Game Award’ for their game Luchador!.

The 2015 IDWCon was the host of the official launch of their second Discworld boardgame, Clacks - which had artwork done by our very own Con Artist!