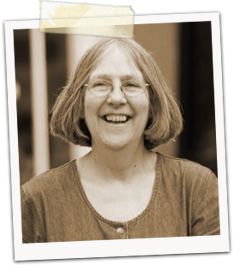 Academic Profile:
Born in Reading, Berkshire, Isobel was already a lover of Discworld before becoming involved (at the same time as Bernard) in 1991. Ever since then, she has been the help that goes with the hindrance (i.e. Bernard) and the ultimate organizer (property Discworld Emporium). She now oversees production of such works as The Complete Discworld Atlas and Guide Book. And as far as we outsiders can tell, the project went quite well! Another major project that Isobel was involved in was the memorable Discworld figurines and The Unreal Estate, which Bernard sculpted while Isobel rang Sir Terry frequently with questions and queries about characters and locations. When not caught up in Discworld shenanigans, Isobel likes to tend her garden and spend as much time as she can with her beautiful grandchildren.